I had the honor and absolute privilege of giving my mom (in-law’s) eulogy on May 4, 2015. She was 92. I loved mom dearly. We all did. Part of this came from a blog I wrote for Prana Pages a few years ago, and the ending presented itself to me as written just before mom passed. Dad had passed in 2003. He was a few days shy of 96.

Our matriarch has passed. Since I’ve been a part of the Krzyzanowski family, I’ve personally considered mom a living saint. There has never been a doubt in my mind.

Over the years, literally every picture of mom and dad showed her head lying lovingly on his shoulder. We all knew how much they adored each other.
~~
Shortly after his death, she woke up hearing the sound of someone singing. Thinking it was a radio left on; she searched for it in the house, only to find nothing that could be the source of the beautiful song. I should add she was very hard of hearing and did not have her hearing aids in at the time.
The next night, the same thing happened. Suddenly she realized the voice was Dad singing to her sweetly sometimes in Polish, sometimes in English. His songs were timely—wishing her happy birthday at the appropriate time, and Merry Christmas when the season rolled around. He often referred to her by the Polish nickname he had for her– Yädˈvēshä.
“`
Dad was not necessarily known to sing, which adds to the wonder and mystery; but singing is so much more romantic, isn’t it? This gift amazingly continued the rest of her days with Dad’s songs coming between sleep and awake.

“`
Once when she visited us in Minneapolis, she was cat-napping on the couch and suddenly lifted her finger to the sky with a smile. She “wondered if he’d find her here”, she said. He did.

You may wonder if this was commonplace for her. Was there a history of hearing voices? Did she communicate with deceased loved ones before? The answer is no. Mom and Dad lived their days together on the farm where he was born almost 96 years prior. Their life was spent in daily prayer, tilling the earth, and raising five wonderful children—one of which I am lucky enough to continue the legacy of photos with my head resting lovingly on his shoulder.
“`
I’ve heard it said that communicating after you’ve passed is not easy. I suspect it might be proportionately easier for those whose lives were spent honoring their creator in thought,  word, and deed.
“`
Mom is the only one I know who literally wore out one of her rosaries. I know because she asked me to try to salvage it. It had literally fallen apart.
~~
Whenever I had the honor of watching mom say her rosary it would bring tears to my eyes. It was humbling to witness her love and devotion as she kissed her prayer cards and fingered the beads of her rosary.
“`
A few weeks ago, mom expressed concern that she “no longer remembered all the words to the rosary”. It really bothered her. Shortly after that visit, I was listening to someone explain how we learn things. She said that when we learn something new, we learn the correct words and the correct labels. Over time, we begin to understand and embody the lesson. We no longer need the words and the labels. She ended by saying, “where can I find the one who has forgotten the words so I can learn from them.” That someone for us was mom. Mom lived her rosary. To me, she was a living saint.
“`
As her vision dimmed and her hearing worsened, she found comfort in the feel of the rosary beads in her hands, and the impression of the cross on her lips. As worried as she was at having forgotten the words to the prayers, she still recited the rosary strongly out loud at Easter from memory, with heart–Still humbling all who had the honor of watching and listening.
“`
Since Easter, there hasn’t been a Hail Mary I’ve said that I haven’t cried. Every Hail Mary I prayed seemed a poor imitation of mom’s example. I recite, but she embodied.  It seemed that as her life was winding down, there was an unspoken request to continue her legacy. She has been our foundation, our strength.
“`
Recently, I shared mom’s story with the priest that married Ed and I. I’ll end here with his response.  Perhaps there are those of you out there who will find the same comfort in his words as we did. He said : ” Those kind of people keep the earth turning on its axis …bless her always and may our Blessed Lady enfold her in her mantle of love and peace.”
~~
Thank you mom. Our matriarch has passed and we all feel the loss. 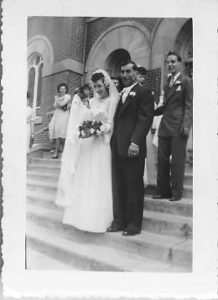 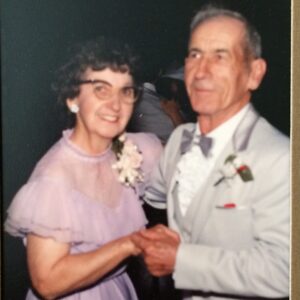