Magical protection from the envious or evil eye….

Feeling a little vulnerable lately? Or maybe someone is giving you the evil eye, sometimes referred to as “stink eye”. Sometimes you just want a little guaranteed luck, mojo and/or protection, right? You’re not the only one!

Amulets that are used for protection go back thousands of years. The open hand as a symbol of protection is universal. Symbols of divine protection based upon the open hand go by many names: Hamsa, Hand of Rachel, Hand of Mirium, and Hand of Venus/Aphrodite, among others. Hamsa literally means “five”. It predates Christianity as well as Islam. The Hand of Mary was used to protect women from the evil eye, boost fertility and lactation, promote healthy pregnancies, and strengthen the weak.

Some cultures adopted the eye as an amulet for protection while others favored the Hamsa (hand). Over time the two symbols were married and thus the Hand of Fatima was born.

This symbol is commonly seen hung at the threshold of homes where it is believed to guard the household and all who dwell there from the influence of negativity. The talisman is purported to offer special protection against fires making it a prominent fixture in many businesses.

Worn on the person as an amulet, the Hand of Fatima offers not only protection, but blessing. The wearer will be granted abundance, luck, vitality and will find the favor of benevolent forces.

The open hand symbol, especially the right hand, represents blessings, power, and strength. “Used to protect against evil eye, a malicious stare believed to be able to cause illness, death, or just general unluckiness, hamsas often contain an eye symbol.”

The “eye-in-hand” icon is said to represent both the act of observation (the eye) and the action of doing (the hand). “See and do.” It combines the sense of sight and touch, combining the sensory input with intentional output through the hands.

There are others, but need I go on?

My first hamsa came to me at a yoga conference where there was a display of symbolic hand-made jewelry. I was immediately drawn to one beaded necklace containing the hamsa. I remembered it was a protective amulet which the artist also confirmed.

I eagerly donned the hamsa necklace and didn’t think much more about it as I went off to a yoga therapy class working with the energy fields of the body/chakras. One exercise involved using a pendulum to check the health of your chakras.

We partnered up with another student. One was to lie down on their back to be tested and the other was to hold the pendulum between their thumb and forefinger above each chakra of their partner. As the pendulum started to move, we’d note the direction and speed, etc. (For a great article on how to use a pendulum to check your chakras, click here.

As I recall, my chakras were all spinning clockwise and fairly “normal”/equal to each other as we started with the root chakra at the base of the spine. My solar plexus chakra had some issues, so we noted that. But the real fun started when my partner got to my throat chakra. The pendulum wouldn’t go in a circle at all. It was all over the place!

How about you? Still not sure about wearing an amulet for protection? Perhaps try the hand mudra for courage and releasing fear that uses the open palm of the right hand facing forward. The right hand asks for help and is also the one used to give blessing.  This mudra is often seen as a Buddha hand gesture called Abhaya Mudra translated from Sanskrit as fearlessness. It can also be interpreted to mean “fear not”.

Some say, with this mudra, you are asking for protection from whomever you put your faith in, which will vary according to your faith tradition. Likewise, the hamsa is worn by people of all religions. Knowing that the symbol of the open hand is recognized as a sign of protection across many societies, I believe its energy to be universal. How about you? Needing a little assurance? It’s only an open hand away.

(Here are two more hamsas I purchased on State Street in Madison—one this past weekend—from one of my favorite jewelers—“Wearable Archeologies”. I googled her name just now to find this synchronistic youtube where she talks about the hamsa being one of her most popular pieces. Enjoy!) 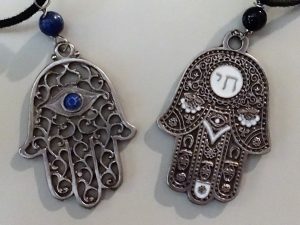