Have you had a dream that intrigued you lately? Did you record it anywhere? I don’t analyze every dream I have, but when I have a similar theme two nights in a row, I tend to sit up and take notice. A few nights ago I dreamt I used a Sunstone to “listen” to what other stone’s messages were. I would put my ear up to the sunstone and “hear” the message. It was as though the dream message was instructing me to use the Sunstone for this purpose. In the same dream I used a flat agate stone—similar to one displayed in my bathroom—and put it up against the right side of my chest. In the dream as soon as I did this, there was a discernible and undeniable “jump” in my body. There was no mistaking a cause and effect from laying the agate against my chest.

I woke up just after this dream which, to me, meant it was calling out to be remembered. The dreams you awake from are easiest to recall, aren’t they?

The very next night I had another dream about stones. Throughout this dream I was seeing a particular kind of agate native to South Dakota called a “teepee canyon agate”. It kept appearing in my hands and I’d investigate it closer and closer, sinking my face toward the stone and noticing the distinctive yellow/orange/red colors. It was almost as if I was awake inside the dream and I wanted to remember this stone. I kept saying to myself—“remember teepee agate, remember teepee agate”. I own a small teepee canyon agate from South Dakota near the Black Hills. My teepee canyon agate has a sparkly druse cluster of crystals on one end. In my humble opinion, druse clusters are like antennae to a magical realm. My husband and I love the Black Hills and this native stone serves as a touch base or talisman to our memories of this sacred land. 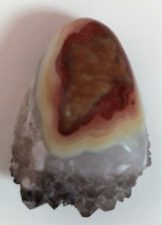 Indigenous tribes consider dream messages of great importance. Their messages and meanings are discussed during fireside gatherings. They are not to be taken lightly. Aborigines in Australia consider dreams integral to their spirituality. Native Americans consider their dream messages as being vital information pertaining to their destiny. Messages from the Universe come via your dreams. They appear in the “magic ‘tween times” happening between sleep and awake.

When was the last time you had a dream that seemed to stand out and call for attention? THOSE are the dreams trying to tell you something! I believe it was the “stone theme” two nights in a row that was the Universe’s way of saying “Hey! This one’s important!” The Universe has a way of pointing things out.

Metaphysically, Sunstone is said to be a “joyful stone” restoring life’s sweetness and helping you to value and nurture yourself. It encourages optimism, enthusiasm, motivation and positive action. Sunstone helps you develop your own originality, encouraging independence and alleviating fearfulness. It has a powerful connection to the light and power of the sun, bringing light to all situations. Carrying a piece around with you can help your personal power to shine. Sunstone brings good fortune and abundance making it a strong manifestation stone. It’s also useful in removing energy draining ties or “hooks” into your energy by other people.

Using Sunstone as the “filter through which I perceive and amplify messages” is an amazing dream message, don’t you think? My interpretation is that you should view everything through the veil of optimism and self empowerment. Celebrate your own achievements. Be yourself; be original; be independent. Let your personal power shine through. Lighten your thinking to improve your state of mind which will improve your ability to manifest your desires.

I’m wearing the only Sunstone I own—earrings wrapped in brass wire. Appropriate they are worn near my ears, yes? The dream suggested listening through Sunstone.

The Teepee Canyon Agate being red, orange, and yellow in color immediately brings to mind the base chakras—root, sacral, and solar plexus. I have always considered my Teepee Canyon Agate as a special talisman. Read this great article on how to personalize your own talisman or amulet. The dream telling me to “remember Teepee Agate” on the heels of using Sunstone as the filter through which to receive messages makes me think increasing the energetic pathway through the first three chakras will be enhanced with Sunstone’s positive influence. Strengthening the first three chakras is in order.

Agates are known as the “stone of balance and well-being”. It balances yin/yang energy and enhances courage and protection. It has a healing, calming energy. Agate is a stone of strength and was used by ancient warriors on their breastplate of armor to give them strength and make them victorious in battle.
Source: http://meanings.crystalsandjewelry.com/agate/

Remember my dream message to put the Agate to my chest for a noticeable shift? How cool is that?

Energetically, Agates have similar qualities to Sunstone in that it increases self-confidence and strength—both emotionally and physically—and it dispels fears. It is a grounding stone allowing for bursts of energy as needed, similar to Sunstone’s ability to let your personal power shine through. Agate also transforms negative energy similar to Sunstone.

So are you ready to work more closely with your dream messages? I thought so! In Dick Stuphen’s book, Oracle Within, he suggests that right before you go to sleep ask for dreams that will assist you in understanding what is holding you back. And here’s the part I like—it suggests asking that the dreams be received literally, not symbolically. (I remembered thinking, “I can ask that?! Why didn’t I think of that?! Well why wouldn’t you be able to ask for a clear answer? The Universe is, after all, an aspect of your Higher Self.)  Ask that you remember them immediately upon awakening and keep a pen and paper by the bedside for recording. (For more on my experience with asking questions and dreams, see my April 2013 newsletter as well as how Better Day Yoga got it’s a name.

Your dreams speak to you in profound ways if you but take the time to interpret them to your personal experiences. It’s my opinion that you know what your dreams mean. Your first inclination as to the meaning is usually the correct one. Trust your intuition. Listen to your dreams. Start a journal and keep it by your bedside to record dreams that call for attention. Your dreams are talking to you and have vital information pertaining to your destiny.