Soham: I am that. Słucham: I am listening.

Hearing any Slavic language pulls on my heart strings, especially Polish. This beautiful language enveloped me in my youth. Even though my parents did not teach me how to speak fluent Polish, I totally knew certain orders: Eat! Sleep! Come here! And I’ve always joked that I knew when to duck for cover. They spoke their native language frequently, especially when they didn’t want us to know what they were saying.

I was the youngest of five, so my parents had been in the United States ten years by the time I was born. Yet, to this day, I can still distinguish a Slavic accent even with those who have been in the States for a very long time. You never forget your mother’s voice. In fact, “new research suggests that babies begin to absorb language when they are inside the womb during the last 10 weeks of pregnancy—which is earlier than previously held. Newborns can actually tell the difference between their mother’s native tongue and foreign languages just hours after they are born.”

As a yoga teacher, I’ve also picked up various Sanskrit words. Sanskrit is said to induce a sound therapy. The pronunciation of Sanskrit affects the meridians of the tongue and stimulates the roof of the mouth where the hypothalamus resides—very important to major bodily functions such as body temperature, appetite, thirst, metabolism, circadian rhythms, physiological responses to stress, etc. The science of mantra repetition creates sound currents and the vibratory effects create a sound therapy manifesting health and healing. It is considered a sacred science.

Imagine my delight when I discovered that Slavic languages, such as Polish, are believed to have common ancestry with the Sanskrit language! Perhaps it’s just me, but I find comfort and more than a little joy in the similarities. “Joga” in Polish is pronounced as “yoga” in Sanskrit, but it doesn’t stop there. The Polish word, “mówisz”, for example, means “you speak” in English and sounds close to our English word “movie”. Doesn’t it make you smile that “a movie with a sound track” is our definition of “talkies”?

“When Soham applies to a person’s name, according to Vedic philosophy (ancient Indian scripture) it means identifying oneself with the universe or ultimate reality. Some say that when a child is born it cries Koham-Koham which means Who am I? That is when the universe replies back Soham. You are the same as I am.”
Source: http://en.wikipedia.org/wiki/Soham_%28Sanskrit%29

Substituting the similarly pronounced Polish words and their meanings into the quote above translates to a beautiful message:

When “I’m listening” applies to a person’s name, it means identifying oneself with the universe or ultimate reality. When a child is born it cries “I love-I love” to which the universe replies “I am listening.”

We are meant to come into this world to love. When we do things with love, the Universe responds in kind. When we pursue a dream for the sole purpose of benefitting mankind in some way, the Universe listens.

When I discovered the common ancestry of the two languages and realized the similarly pronounced words, my heart just melted. I knew there was a reason I was so enamored with Sanskrit. Its similarity to Polish is undeniable. It seemed to be a sacred kind of kismet—my two loves colliding: the love of my Polish ancestry and the love of all things yoga. It was as if the Universe was saying my two loves have the same roots in my DNA: “You are the same as I am”. 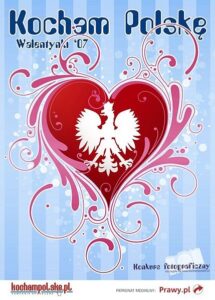