What I did this summer. Remembering to walk the talk

I subscribe to “The Sacred Science” blogs and received an email this morning reminding me of a synchronicity I’d already forgotten about. I believe we receive messages from the Universe all the time and that acknowledging those messages is what turns the spigot on for more of the same. So receiving this reminder email simply added to the synchronicity demanding to be heard, recognized, and celebrated. Just like a good friend that’s encouraged to share more personal stories when they see we are listening and are present for them, the Universe will quit sending messages if we aren’t noticing them. So please let this post be my way of saying to the Universe: “Thanks! I needed that!”

I often share a similar sentiment in my yoga classes that the more we listen to our body’s messages, the better our intuition becomes. There’s a wise suggestion known in yogic philosophy to listen to your body whisper so you don’t have to hear it scream. As you read on, know that I needed to relearn that lesson too.

I’ve been having some physical issues this summer, to put it mildly. Without going into a lot of boring details, let me just say that it’s my opinion I may be experiencing side effects of the hypothyroid medicine I’m on. There’s a long list of them. It wasn’t until I researched and found that one of the side effects is favoring a hip with a limping gait that I sort of lost it. My hip has been an issue for about as long as I’ve been diagnosed as hypothyroid. I hadn’t connected the two until recently learning that there’s importance in knowing the root cause of an auto-immune diagnosis so I’ve been analyzing it a lot. It’s all very intriguing.

I had cut back on some anti-inflammatory supplements to trim down my intake and then my side-effect symptoms starting appearing more prominently. So I might have been medicating the side effects with anti-inflammatories for awhile. Lately my hip had literally been giving out at times, causing my sacroiliac joint to be very unhappy from all the jarring, not to mention the hip pain. Thank God for my yoga practice. It has been and always will be my lifesaver in so many ways. It’s like an etch-a-sketch for what ails me.

My visit to the doctor only resulted in “normal” thyroid readings. I plan to see a functional medicine doctor soon to see if we can unravel the mystery.

I also decided to finally get a mammogram. It had been ten years since my last one—I know, I know. I consider myself very holistic so it was incompatible to me to have X-rays looking for cancer when X-rays are known to cause cancer. But since advancing age is also a cause of cancer, I decided to pull my head out of the proverbial sand and get a mammogram. They considered this a baseline since it had been so long and I was told more than once that to try to find my ten year old mammogram would probably not be worth the effort because of the typical file purging; and that even if I did find it, it would be too old to be helpful. So I left it at that.

They needed me to come back for a second mammogram because of suspicious micro-calcifications. And that mammogram was not enough to rule out cancer so they recommended a biopsy. Again I was told finding my old mammogram would not be helpful. The biopsy was done on a Friday morning and I had to wait until the following Tuesday, early PM, to hear back on the results. I had originally thought I should write about that ordeal and my blog title was to be “walking the talk”. But it felt too personal at the time. I needed some space.

I will say that I had a good long talk with myself, during the stressful four-day-wait for results, as I kept sliding into panic mode. I told myself, “If you can’t use the skills and wisdom you share with your students about handling stress, then what kind of yoga teacher/therapist are you?”

I am always reminding my students to take the time to regularly practice stress reducing activities like yoga, meditation, and breathwork so that they’re in their “back pocket” when they’re needed most. These routine practices are like old friends, ready to soothe. It’s only a breath practice and a silent meditation away. My daily personal yoga practice always gives me just what I need physically, emotionally, and spiritually.

When I arrived for my biopsy appointment, I explained to the receptionist that I might smell like sage as I had smudged myself earlier to keep the bad juju away. I also wore my protective hand /“hamsa” shirt to ward off the evil eye. I was laughing as I shared this with the receptionist which caused her to comment that she was so glad I did what I needed to take care of myself. She shared that most of the time people show up and they’re a basket case. She didn’t know I kind of was a basket case inside. Thank God for my sweet husband, Ed, who came along for support.

Four excruciatingly long days later, the doctor called to say the micro-calcifications were benign. There was a lot more detail than that but enough said. He recommended that I come back in for a follow up mammogram in six months since this was considered the “baseline”. I mentioned the ten year old mammogram and the comments his colleagues had shared more than once about not needing to find them. On the contrary, he was very interested to see them. Okay, sure. I’d try to remember where I had the mammogram ten years ago.

It took me all of maybe ten minutes to remember, call, and have the ten-year-old mammogram digitally sent to the doctor who did my biopsy. He called me within an hour to say “Good news! It looks like the micro-calcifications have been there since 2007!” He then added, “I sure wish we’d had these sooner because it would have saved us a lot of trouble.” In other words, had he had them, he would not have seen the need to do the biopsy in the first place. Well that was more than frustrating to hear. Yet and still, good news is good news and I was more relieved than words can say! My husband and I had a celebratory dinner out that night.

The summer still had more in store. Two weeks later, Ed and I went to the Polish Festival here in the Twin Cities. Last year we attended but there was no dancing to be had since Ed had fallen 15 feet only 14 weeks prior and he broke his left talus (foot) bone and right big toe. So this year was extra special as we danced our “dupas” off on the polka floor, making up for lost time. Was that smart considering my hip had been acting up? Probably not. But I will never turn down an opportunity to dance! This I know about me! (So much for listening to my body whisper, right? The thing is, my body was also screaming to dance the polka!)

It may have been a combo of bad shoes and a tender hip but I didn’t realize until the following day that I screwed up my right knee and my left peroneal tendon pretty bad. We even walked around after dancing without issue, so who knows. It was quite warm and we were so content to have come full circle from Ed’s fall the year before. Perhaps the festive atmosphere and our sheer joy numbed us to the after effects.

I couldn’t walk without pain at all the following day. I have not been able to walk without extreme pain in the left heel and a very spongey right knee going on the second week now. In case you’re wondering, except for some soreness for sure the next day, Ed appears to have been no worse for the wear! I must have been the one out of practice! Go figure!

Here’s where the synchronicity popped in—just by “coincidence” I only had to cancel one class in the next two weeks due to vacations having cancelled the others prior. And the one class I did have was a private client appointment so it required less props to carry into the location. Plus my husband drove me so he was there to help since my car was in the shop (oh, that’s another summer story!). The Universe somehow knew I would need the time off to rest, recoup, and heal.

It’s not in my nature to take time off no matter how bad I’m feeling—which brings me back to the yogic philosophy I mentioned earlier—listening to the body whisper so you don’t have to hear it scream. Apparently I needed to learn that lesson again. I realize I really should have taken the time to do less sooner. Remember I said I’d needed some space? Why didn’t I listen?

The whole breast mammogram, recall mammogram, biopsy, four-day-wait fiasco had taken more of a toll on my psyche than I cared to admit. We can’t just keep sweeping things under the carpet and expect to continue on our merry way without repercussions. I knew this deep down, but I didn’t listen. I really hadn’t walked the talk after all, at least not as well as I could have. Lesson learned.

I have to wonder if I’d taken some time to decompress after the mammogram results like I really wanted to perhaps my body would have been in a better state overall when I danced the polkas. The mind really is connected to the body. They are inseparable. So not only did the Universe pre-plan my much needed time off in my business schedule, it also gave me reason to sit still more than I had been due to the injury. Apparently I really needed to stay put. Maybe the next time I need to learn a lesson, the Universe won’t have to resort to bodily injury to get me to listen. One can only hope. 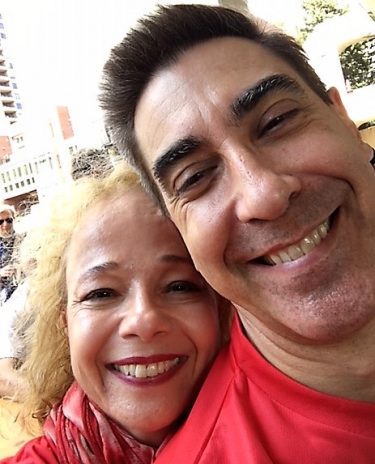 Photo taken just after our polkas!
So content and happy to have come full circle