Hail to the jewel in the lotus flower

Each week I write about what the Universe brings to my attention. This morning as I awoke, my gaze landed on one of my favorite photos of a Quan Yin statue taken just outside Andrea Smith Gallery in Sedona, AZ. The photo is nestled in the mirror of my bedroom dresser and appears just behind one of my favorite statues of the Blessed Virgin Mary—a statue given to me by my mom. Their close proximity to each other is no accident. Their similar coloring (See photo below) practically screamed that I position them near each other. Also, I consider Quan Yin the “Asian equivalent of the Blessed Virgin Mary”. 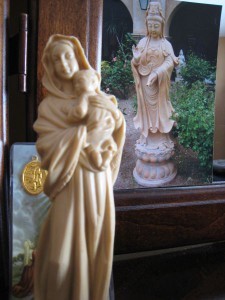 Quan Yin is a bodhisattva, meaning she is eligible for Buddhahood. Yet she’s vowed to stay near Earth until all beings are enlightened. In Sanskrit, her name is Padma-pâni, or “Born of the Lotus. Many think of her as the Buddahist Madonna. She is known as the Goddess of Compassion who hears the cries of the world—a trait also associated with the Blessed Virgin Mary.

I was dwelling on this topic, among others, as I was preparing lunch today. I thought perhaps I should save this topic for my newsletter and turn it into a whole focus—adding crystals, colors and wild life associated with Quan Yin.

While eating lunch, I tuned into a favorite television show that happened to be on and in the background was a statue of Quan Yin in a park area. That was my sign! Then as I was in the middle of writing this I received an e-zine that contained a story entitled “Crystals and healing in the Buddhist Tradition“. It mentions the mantra associated with Quan Yin: “Om Mani Padme Hum”, which means “Hail to the jewel in the lotus flower”—a prayer I have on my desk next to a Quan Yin statue—and also mentions Jade as a stone considered sacred to Quan Yin. Second sign!

I’ve written about Quan Yin before. Simply looking at her image has always made me feel peaceful and protected, even as a child before I knew more about her. I’d never questioned the beginnings of my Quan Yin attraction. It was just “there”, until I made the connection…

A kind lady in Shakti’s Books & Gifts in Madison, WI asked me if I knew who the beautiful Asian lady was on the necklace she was contemplating and I started to share with her what I knew. It was when I mentioned that I’d read Quan Yin was considered the Asian equivalent of the Blessed Virgin Mary, both embodying “Divine Mother” energy, that a childhood memory hit me like a ton of bricks.

I remembered we had an Asian lady statue/lamp in my childhood home. Looking back, I’m fairly certain it was Quan Yin, but I didn’t know that at the time. I made the connection as I spoke to the kind lady in Shakti’s Books & Gifts. I was in awe of this statue. My siblings, ever ready to tease me incessantly, knew this and instilled a smidgen of anticipation in me by suggesting that if I watched her intently enough (which I always did), she’d open her eyes. I felt as though she was watching over our whole household. Finding out she was probably the Goddess of Mercy and Compassion was simply an added bonus.

I connect with the “Divine Mother” each morning through my morning meditation mantra—the “Hail Mary”/ “Ave Maria” salutation. Along with the Blessed Virgin Mary, I believe Quan Yin, Tara, Athena, White Buffalo Woman, Lakshmi, and Isis, among others, all embody the “Divine Mother”—the loving, nurturing, magical healing energy. I believe they are different representations of the same energy and embody different forms so they’ll appear in the correct form for you to accept. We are only open to that which we believe in—yes? So why wouldn’t “Divine Mother” energy embody many forms for all the world to appreciate? “Hail to the jewel in the lotus flower” resonates “Hail Mary full of grace” and both prayers bring me peace.

This post was originally posted March 6, 2013 on a Prana Pages blog I shared with a colleague. That blog has been discontinued so I am reposting some of them as I have time.