My mom lost her mom to pneumonia when she was only 13 and was auctioned off as a prisoner of war to a German farmer during WWII when she was only 18. She never saw her family again after the war. My parents met in a displaced persons camp and immigrated to the U.S. on March 11, 1950—68 years ago. My mom’s dad died in 1968 after she’d already been in the U.S. for eighteen years, trying to make a life for her growing family of five children. She received a letter from her step-mom bearing the news of her dad’s passing. I remember she cried all day.

Several years later she purchased a set of statues depicting an elderly couple. The grandfatherly figure of the pair was a shoemaker busily making shoes as the grandmotherly figure peeled potatoes. She shared that the statues reminded her of her parents—in particular, the shoemaker because my grandfather was a shoemaker. I was in my early teens when she purchased the statues and I grew to treasure them. I’d never met any of my grandparents nor were there any photos of them that I’d ever seen. So this was my only tactile piece to “remember” them by. This my mother knew. I mentioned my admiration for them often. 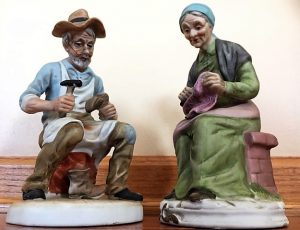 My mom passed away at 62 in 1987 with stomach cancer that spread to her lungs—which we didn’t know until the autopsy, but that’s for another story. My dad moved from the house they last shared into another one not too far away for a few years, and then he decided to move to Florida (from Indiana) permanently in the early 1990s. Just prior to moving, he got the idea from one of my older sisters to auction off his household belongings so he wouldn’t have to move them all; and he could start fresh in Florida. My sister had done something similar a few years prior with her possessions. It brought in some good money and helped clear the slate without a lot of hassle clearing out old stuff. That appealed to dad.

Not wanting to keep any extra cash from my dad, when he asked us to pick out what we wanted from the family house, I only chose a few precious pieces—some mugs I’d bought mom and dad with Polish endearments on them, a few nick knacks including a bright red candle base I thought I’d use for Christmas, and the elderly couple statue set. Two grocery bags contained the items I chose.

My husband and I lived five hours away in Madison, WI at the time. We were expecting his sister and boyfriend up for a visit the following weekend. So when we got home with our bags filled with memories, I put them aside to prepare our house for company.

I burst into tears. I had no idea she had earmarked them this way for me. Needless to say, they are now one of my most prized possessions—a message from mom written to me eight years before she passed. You never know when you’ll hear from your loved ones. You may not know what messages they’re trying to send. Turn over your statues.