It’s all energy, And it’s all good

Last week I wrote about gathering energy emphasizing some ways spiritual energy grows. You’ve all felt this in your “favorite” spots, clothes, people. Right? There’s a reason you are attracted/attached to those favorites. Your energy resonates with that place, person, or thing. There’s a reason we use the term “magnetic” when referring to some personalities we are drawn to. Magnets attract, right?

One of my favorite books, The Celestine Prophecy by James Redfield uses synchronicity as a clue that you’re on to something, because “everything happens for a reason”. As for myself, I believe it may have been this book that introduced me to the power of three. Three is a sacred number. Trinities appear in many of the world’s religions and cultures: Father, Son, Holy Spirit; Mother, Maiden, Crone; Brahma, Vishnu, and Shiva. If something comes to me three times—be it an idea, a song verse, a contact, etc.—I sit up and take notice. The Universe is trying to tell me something. In the book I remember the author suggesting that if you have two roads to travel, take the one that glows with an energy you’re attracted to. What lights you up? Go there.

Another favorite book of mine is The Secret by Rhonda Byrne. The Law of Attraction would go so far as to say our thoughts are things and they create so make them good ones. Because “energy goes where attention goes”. And “what you focus on expands”. “What you resist persists”. I could go on but I think you get the idea.

The bottom line is this: Your life is a reflection of what you believe. Or as Wayne Dyer says in his best-selling book, You’ll see it when you believe it.

Energy appears to you in forms you will accept. For example, I believe Quan Yin, Tara, Athena, White Buffalo Woman, Lakshmi, and yes Isis, among others, all embody the “Divine Mother”—the loving, nurturing, magical healing energy. I believe they are different representations of the same energy and embody different forms so they’ll appear in the correct form for you to accept. We are only open to that which we believe in—yes?  So why wouldn’t “Divine Mother” energy embody many forms for all the world to appreciate?

Do you believe in energy therapy? Do you believe there’s a reason we rub an injury after bumping an object? We have energy centers in the palms of our hands. Do you believe that there’s a reason we rub our forehead points when stressed? These are reflexology points that help you relax. How about when we cross our hands over our chest and rock when we are very stressed? The points below the collar bone covered by crossed over hands are also important meridian points for stress and anxiety (among many other things!) and rocking is soothing to our nervous system. Our body innately knows what it needs.

How about Reiki? Do you believe in this mode of healing energy? I don’t believe Reiki (or any type of energy therapy) will be as effective if you don’t believe in it. How could it be? Why would energy be attracted to you if your energy (and yes, we’re all scientifically proven to be energetic beings) is repelling it? Henry Ford was famous for saying “Whether you think you can or you think you can’t, you’re right.” Again, we’re only open to that which we believe in. If you can’t accept it, you won’t receive it. Body, mind, and spirit are intimately connected. There’s a reason Jesus is quoted as saying “your faith has healed you.” Placebos work because of our belief in them and as Wayne Dyer used to say “If it’s placebo, I’ll take two.” Do you believe that your beliefs/thoughts have energy?

I judge by experience. When my husband fell off the roof a couple of years ago and broke the talus bone in his left foot and his right big toe, I began sharing Reiki with him regularly sometimes several times throughout the day. Prior to his accident, I wasn’t sharing Reiki with him regularly—just here and there with no consistency. As a result, my practice was limited.

There’s something about sending your energy to someone you love that amplifies the effect. I learned the hard way that I need to set the intention not to drain my own energy. Reiki uses Universal life energy, but if you don’t set the intention right, you’ll drain your own. I gladly gave my husband all I had at the time.

He would sometimes jump as he felt what he referred to as electrical charges when I held my hands over and around his healing talus bone and toe. I’ve always believed in visualization. So I’d visualize him dancing the polka with me (we both are very Polish) and running up and down the stairs.

As he healed and as time passed, the “electrical charge sensation” that made him jump were less and less; but he can still feel the energy flowing out of my hands. I still share Reiki with him each morning as he shaves as our schedules permit. I sit on the floor, surrounding his foot with crystals to magnify the energy, and wear various crystal Malas adding yet more crystal energy. (Don’t even get me started on whether you believe in crystal energy! Crystals are in watches, computers, and even your mobile phone. That acronmym “LCD”? It stands for “liquid crystal display.) I trace the “Cho Ku Rei” symbol on the palms of my hands with a small selenite wand and proceed.

My “go-to” meditation prayer, the Hail Mary, dominates my Reiki sessions. I’ve noticed that reciting this prayer helps the energy build. One of my yoga students, with whom I shared Reiki during a final relaxation, can actually see energy. She shared with me that my Reiki energy appeared to her as “Mary energy”. This was such a huge gift to hear! I hadn’t shared with her that I recited Hail Mary’s much of the time while sharing Reiki. A Reiki session just after I’ve meditated using this prayer has more energy at the get-go. Remember energy builds.

My husband and I have come to treasure our morning Reiki ritual. I open each session with a silent Pope John Paull II prayer (calling on our Polish ancestry) and end it with saying the St. Francis Prayer out loud—a mutual favorite of ours. As I finish reciting the prayer, my husband touches my head as a sign of endearment. Remember, I’m sitting on the floor as he stands to shave. Once he started doing that final touch, I asked him to please do it every time because it has a sense of sealing the energy of the moment.

Our mornings aren’t complete when we aren’t able to complete this morning ritual. It means something to us. It’s part of our connection—our energetic connection, if you will. Spiritual energy builds and grows stronger when you work on it. It’s all energy and it’s all good. 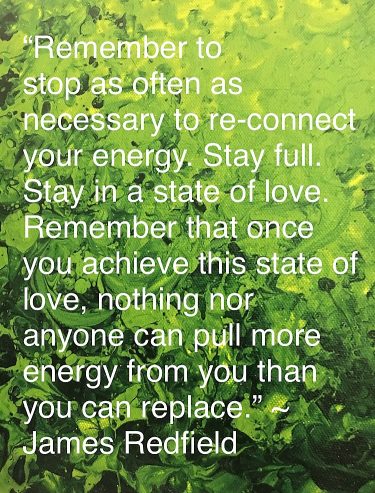