The quieter you become, the more you can hear ~ Ram Dass

I completed a second day of silence as part of the required homework for level II of Indu Arora’s Yoga Nidra training coming up in August. I did the first day of silence with my husband back in March and completed the second one on the anniversary of my mom’s birthday. There are various levels of silence. I chose a deeper practice the second time because my husband was to be out of town on business. I managed about 10 hours—amateur, right?

It sounded perfect originally. Ed would be out of the house so my silence wouldn’t be difficult—or so I thought. You see, I’m pretty attached to my husband so I still exchanged texts with him to make sure he arrived safely and also to wish him well on his appointments. This connection we have is not easy to turn off—especially when he’s out of town. “What if’s?” haunted me, hence the texts were something I just had to do despite my original resolve to be without technology.

I started the “count” shortly after my ritual Facebook post honoring my mom’s birthday and how she loved that her new country celebrated Flag Day on her birthday. She would raise the flag with pride that day, and I joke that my dad enjoyed the head’s up it was her birthday. Both she and my dad were prisoners of war during WWII and immigrated to the United States in 1950. Both had PTSD, which my trauma-informed YogaFit training clued me into with great detail. The training allowed my childhood to make so much more sense. I’m in the process of writing a book tentatively titled “The Why’s matter”. Because they do.

I spent much of my silent mode that day dwelling on my mom and our history, coming to some major understandings about certain events from my childhood. Without the sustained silence, my thoughts would not have gone this deep nor made the connections I was able to make. In retrospect, I’m surprised I didn’t make the connections I did earlier in life. It was like a big ole’ slap on the head for me. D’oh! Why didn’t I go there before? Silence is powerful. Or maybe I was just ready now.

I believe I connected the dots on at least one important memory. Being aware of PTSD and what triggers and flashbacks can do to hijack the brain—and I do mean hijack—not only helps in understanding the immense burden both my parents were dealing with emotionally; but also helps in making peace with it. Needless to say, reframing those events has been healing for me. This day of silence created the perfect conditions for a deeper resolution on one particular event that has troubled me over the years.

Without going into details, the evening progressed into what I can only describe as interesting. No alcohol involved. I was relaxing at one point and meditating when I woke up in the midst of deep dreams in another part of the room. I do not remember getting up and moving and it felt like I was “solving something” in my dreams. I awoke to the sound of the timer on the stove where my dinner was baking and I knew the timer had been going off for some time. As I awoke I had the realization that something wasn’t normal here. I don’t remember moving! What happened? I immediately realized my legs felt vibratory such that I was afraid to walk down the stairs, for fear of falling, to turn off the oven. I shimmied down the stairs on my butt for safety. It was all very woo-woo. Enough said.

I kept going over the details in my mind, confirming that I did NOT remember moving to the other part of the room. I have never “blacked out” like this before or woken up somewhere I didn’t remember falling asleep. I only know that my day of silence brought me some special gifts I will never forget, nor would I want to. This makes me want to practice other days of silence, perhaps for longer periods, to see where they will go. My inner self had some things to share. It’s time I listen. 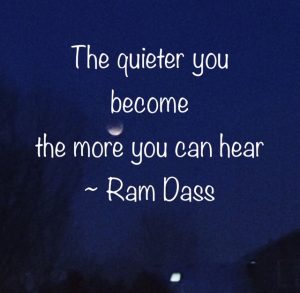