Communicating with spirits…an abundant exchange of all good things

I’ve shared before that a student of mine suddenly noticed in her down dog that her feet looked just like her mom’s. Ever since then, I’ve used that as a pondering question in class. Who’s feet do you have? Which ancestor has passed those traits on to you? Invite your ancestor into your class. Send a mental “hello” and “thank you” to them right now.

Since this is Halloween week, why not instill some thoughts in your yoga practice toward thinking of and perhaps connecting with someone special in your life who has passed on. Perhaps use this thought as your intention for your yoga practice that day.

I’ve heard that during this time of year it is easier to communicate with those who have passed since the “veil” between the living and those who have passed is “thinner”. It doesn’t have to scare you. Why not take advantage of it in the spirit of the season? You probably already send them “hellos” on any given day. Why not dwell on the possibility that this time of year it’s easier to visit?

Here’s a little history:
“October 31 was the last day of the ancient Celtic year and the Festival of Samhain, the Celtic god of the dead.  As one year became another, the Celts believed, the spirits of the dead could return from the beyond to share joy and happiness with their living loved ones. Feasting, dancing, and singing celebrated this opportunity. Enormous bonfires lit the night sky, welcoming revelers and spirits alike.

But fearing that some of the returning spirits might have less than honorable intentions, people often donned masks and costumes to hide their true identities. The good spirits of departed friends and relatives of course knew those behind the masks and could make contact for a joyous reunion. The light of dawn, marking the start of the Celtic New Year, recalled the spirits to the spirit world.

In 835 Pope Gregory IV proclaimed that the last day in October was to be known within the Catholic Church as All Hallow’s Eve, or “All Holy Evening”. On this date, he decreed, Catholics everywhere were to gather and remember those who had given their lives in the name of their faith. The next day, November 1, became All Saint’s Day (also called All Soul’s Day), a time to remember all who passed on.

The Catholic Church views this ‘communion of spirits’ as a reminder that there is a continuous link between the souls of the living and the souls of the dead.  Says the Catechism of the Catholic Church, the Church’s official teachings, ‘Between them there is an abundant exchange of all good things.’ Various Protestant religions also observe these celebrations.”  ~ The Complete Idiot’s Guide to Communicating with Spirits by Rita S. Berkowitz and Deborah S. Romaine.”

Personally, I’ve always thought that the more open you are to “hearing” the Universe’s messages, or a loved one who has passed on for that matter, the more likely it will happen—or at least the more likely you’ll notice. The Universe speaks in subtleties so unless you are tuned in, you could totally miss it. That’s where your yoga practice comes in!

As a yogi, you’re practice includes listening to the subtle messages your body is sending so it doesn’t have to send a loud scream. So you are, in effect, training yourself to notice subtleties. As a yogi, you begin to notice when your feelings change, when your physical sensations speak up and when your spiritual connection deepens.

Sending off mental invitations and silent hello’s to those who’ve passed isn’t hard. You’re probably already thinking of your special someone. You’re remembering them in their own special way, with their own special traits and characteristics. Knowing that you’re open to connecting and knowing that you share a special memory, or that a special something reminds you of them, creates the magical “stuff” your connection manifests from. My mother-in-law’s connection/communication with her late husband was so strong, it continued for twelve years after his death until her passing in 2015.

The Universe knows what you’re “up for” too. You may be open to subtle connection but an outright visit might scare the living daylights out of you! Me too! Keep surrounding your thoughts in love and light.

I read a book by local but internationally known author, Echo Bodine, called Relax, It’s Only a Ghost. In it, she reminds you to say loudly and firmly “Not welcome!” when you feel scared. Wish I knew that as a small child afraid in my bedroom after a nightmare.

On the nights my husband is out of town, I surround myself with guardian angels when I can’t sleep. One corner has the Archangel, St. Michael, in the image of John Travolta’s portrayal. It makes me smile. One is Clarence, from the movie It’s a Wonderful Life—my absolute favorite Christmas movie! One is Gideon, from the Christmas show One Magic Christmas. And the last one is the Archangel Raphael, the archangel of healing and protection who is associated with the color emerald green. (Recently I added Dudley from the The Bishop’s Wife” —another of my favorite Christmas movies!) By the time I’ve conjured up these images and colors at the four corners of my bed, I’m content and less on edge. This is what I mean by surrounding your thoughts with love and light.

Connections come in subtleties. It might be the shape of the clouds in the sky. It might be the cardinal that you suddenly see or hear. It might be that the rain stick near your fireplace drops a pebble out of the blue at just the right time. Both the cardinal and the rain stick are my dad’s form of communication with me. I don’t believe in coincidences. My dad’s been gone for over 15 years now. The rain stick became his mode of communication some time ago. He knows it. I know it. It’s an old friend by now. When I hear the pebble drop or see the inquisitive cardinal, I simply say “Hi dad. I love and miss you too.” Happy Halloween everyone! Create your own magic by inviting it in! 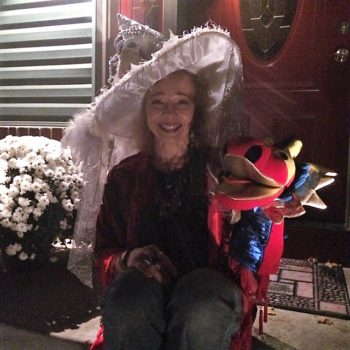