I’ve written about my Mom (in-law) before. There’s the story of her hearing Dad sing to her each day after he passed until her death 12 years later. There’s the story of my sharing with her the mala beads that I pray Hail Mary’s with. She expressed no judgement of my choice of beads—she prayed the rosary daily, and I mean daily, sometimes twice a day. She commented at the time “it helps, doesn’t it?” I mentioned in a previous blog that she’s the only person I know of that wore her rosary out. She asked me to fix her rosary once because it had disintegrated from use. I often refer to her as one of two people in my life that I have considered a living saint.

So suffice to say that I believe there’s a whole lot of good energy built up within her rosary. Dad’s as well. I remember one time approaching their bedroom as they were about to retire for the evening so I could give them their evening good night kisses and hugs. I literally gasped when I saw Dad on his knees thinking he was hurt before I realized a split second later that he was kneeling by his bedside to say his nighttime prayers. I was constantly humbled by the two who raised my husband into the treasure that I now enjoy going on 34 years—37 if you count how long I’ve known him.

Recently there was a request for advice in a private yoga therapy Facebook group I belong to from someone who’d been asked to hold sacred space for her dying friend. There were many heartfelt contributions, including the one from a kind soul that shared: “Be ready to be present with what your friend “sees” as the end approaches. Regardless of belief systems, many will see dead relatives, or an opening in the room, or feel as though there is a trip to go on. Your friend may point (if non-communicative) or just give really strange looks, because no one has told them of this very normal part of dying. Affirm your friend, create the space for your friend to experience ALL of the emotions that go along with the end of death. Often the health care professionals also don’t “warn” people of this part.“

This touched me so deeply that I shared the passage with my husband and paused to insert his mom’s story right after the mention of “a trip”. The hospice worker who was there the day before mom passed, came after she passed to pick up equipment, etc. She shared that when she last visited the day before, mom had briefly woken up from her sleep looking all bright and cheery and announced “I’m going to heaven today” and then promptly fell asleep again. Our final visit with mom was very emotionally blurred so I didn’t remember my husband was not in the room when the hospice worker shared that story. Tears welled up in my husband’s eyes when I recounted the story (two years after she has passed). It was oh so poignant for him to hear. The look on his face was priceless. It was a sacred moment for both of us. I sent a note off to the author saying how grateful I was that her note prompted me to retell this story to my husband. 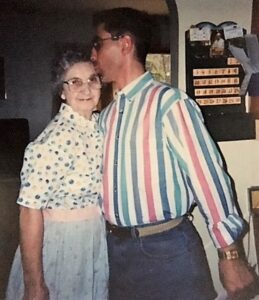 I use this box from mom containing both her and Dad’s rosaries daily when I do Reiki over my husband’s still healing foot from his fall last year (15 feet). I know like I know like I know his parents are present helping it to heal. And if you ever doubt that loved ones stay present in your lives after they’ve passed, ponder the story of Dad singing to mom daily for 12 years, and the story of the Facebook post prompting a memory my husband needed to hear. I know Mom was reaching out to say hello. Life is so very precious. ~

P.S. I’m adding this as an “update” of sorts, or perhaps the “rest of the story”. At the end of the day after I posted this I went upstairs from my office which is in the basement. There’s a light switch at the bottom of the stairs that corresponds with a light switch upstairs so you can turn it on and off at either end. We’ve lived here well over 20 years and the following has NEVER happened. Later I needed to go downstairs again and I turned on the switch at the top of the stairs and no light went on. There is more than one light bulb in the light fixture so it wasn’t a burnt bulb because that would have been too coincidental. So I wondered if I’d blown a fuse. I walked down the stairs in the dark and hit the switch downstairs up, then down. Nothing. Then up and down again. Nothing. Then up, because I’m stubborn! The light went on! Okay, I’ve posted about my dad using electricity to communicate after he passed before. Communicating through electricity is apparently a venue of choice for those that have passed: ”They also work through electricity – turning TVs and radios on and off, affecting lights, doorbells, phones. They seem to be able to manipulate energy – most likely because they’re energy!”  http://www.grandtimes.com/communic.html. It’s the only explanation in my mind. I’ve used this switch several times since with no issues. Mom was having fun with me! Hi Mom!

I would love it if you would subscribe to my blog/newsletter. I don’t publish on a regular timetable so subscribing is a good way to make sure you don’t miss out on any amazing posts such as this one! (Poking fun at myself. 🙂 ) You’ll also be the first to receive updates, resources, and more. I’ll even give you a free gift! 🙂 Click on the “FREE Chakra-Balancing & Loving Kindness Meditation!” link in the right-hand column. Thanks!

« Soham: I am that. Słucham: I am listening. Approval from within »