I’m in the process of writing about my family’s history. From my trauma-informed yoga page:

“My parents were prisoners of war on German farms (forced labor) during WWII. My dad was taken from his home when he was 17, my mom was auctioned off to a German farmer. After the war, they met in a displaced persons camp in Germany—still basically prisoners—got married in that war camp, and had two children in that war camp.

Most don’t know about this part of WWII history. Displaced persons were unwilling to return to their country of origin. The way my dad told it, there were regular attempts to trick them into signing papers saying they were willing to become communist and return to Poland.

I was the youngest of five. My two oldest siblings were born in the camp. I only knew the food supply was limited and an escape attempt could result in death, which didn’t stop my dad from leaving the camp one night to get more milk for his children—successfully unnoticed. The stories told to me were filtered through the lens of what you’d tell your child. It wasn’t until after my mom passed and dad remarried that I heard more details (told to me by my amazing step-mom) of sites seen and experiences you wouldn’t share with your children.

My parents and others like them buried their despair and their grief and moved on to a new life in the U.S. This is a common theme among WWII immigrants to the U.S. Their children learned to ask no questions. You were not to touch the sleeping dragon. They didn’t talk a lot about their time in the camp. We left it alone. Sometimes I wish I had asked more questions.”

Both of my parents have passed away. My mom in 1987 (see my previous post) and my dad in 2003. Information on my mom’s history is sketchier than my dad’s since I have been in contact with my dad’s side in Poland.

Yesterday I started to piece information together about my grandmother on my mom’s side. I’m almost 57 years old and for the first time I am trying to understand my maternal grandmother’s history. I have no photographs of either of my maternal grandparents. I only have some notes.

I remember one Sunday afternoon in 1986 my mom and I were sitting at the kitchen table during one of my visits. She started to talk about her family in Poland. I forget if I asked a question or if she started the conversation. Either way, I remembered thinking I should write what I could down. So I grabbed the quickest notepad I could find. I knew this was a rare moment and I knew better than to get too inquisitive for fear of shutting her down. She didn’t like to talk about “the old country” too often. Remember earlier when I said you didn’t touch the sleeping dragon? There was a line in the sand you didn’t cross, questions you didn’t broach.

As I look back at those notes, I kick myself now for not getting more specific details. But that was a long time ago. I’m much older now…and much braver. My mom’s been gone over 30 years now. I’m almost as old as she was when she passed away. Her history may have passed away with her as I’m not in touch with her side of the family.

I spent yesterday researching the timeframe of my grandmother’s life. What was going on around her? I tried to put myself in her shoes.

My mom was born June 14, 1924 in Rzeszow, Poland. Her mother was Zofia (Sofia). This was Zofia’s second marriage. Zofia’s first husband froze to death while in the U.S. for his job. I don’t know the details of why he was in the U.S. Sadly, I don’t even have his name—first or last. I don’t even know my grandmother’s first married name. Gaps in my history like this sadden me to no end. Zofia had three children in her first marriage. The first two children were twins, Simon and Mary, and they died when they were “about three”.

I often wonder why I didn’t ask more. How did they die?  Why was Zofia’s first husband in the U.S.? How did he freeze to death?

I don’t know the year her first two children passed away. I don’t know when her first husband left for the U.S. or even how long he was there. But I have to believe travel was either very limited or banned once World War I started. So I suspect her first husband was not in Poland at the start of the war given how tumultuous Poland was as a result of the war. I don’t see him leaving his family right after, but this is only a presumption on my part. I only know Zofia married my maternal grandfather in 1922.

Rzeszow, the area where my mom’s family lived, was hit hard during World War I with three armies fighting across their land. From 1796 until 1919, Poland did not exist as a county. In 1922, it had only been four years since World War I had ended after much destruction to their land and less than three years since Poland’s independence had been confirmed June 1919 thru the Treaty of Versailles. There had been border fights fought between 1918 and 1921. Poland was finally “settled” in 1922.

Suffice to say, Zofia lived a hard life. Losing your husband overseas and having a family to raise on your own would be difficult by any stretch of the imagination; but given the political environment in which she lived, I can’t imagine how she was able to pull herself together. As I tried to put myself in my grandmother’s shoes for the first time to this extent, I felt like I was literally “creating” my grandmother’s memory.

Grandmothers treasure their grandchildren. I dwelled on the lost moments, lost memories. I even pondered what she might think of me, her grandchild. I looked so much like my mom, I wondered—do I resemble my grandmother, Zofia? I was overwhelmed with emotion.

My heart was heavy and my head swimming with all the research when it was time to stop for the day. My husband and I have a standing “date” to go out on Friday’s to our favorite restaurant, Buona Sera. On the short drive over to the restaurant, I read to my husband what I had cobbled together on my grandmother’s history; and I verbally beat myself up over asking these questions so many years too late.

As we walked up to the restaurant from the parking lot, I was lamenting over and over, “I know nothing about my grandmother. I know nothing!” Feeling more than a little bit inadequate at my day’s work, we walked in. Raffaele, the owner of Buona Sera, was seated at the bar in the entryway as Jessica, the lovely hostess, greeted us with her usual warm smile, and Raffaele’s daughter, Anna, waved behind her with excitement at our arrival. (Did I mention how much we love this man and our Buona Sera family?)

Almost immediately, as he often does, Raffaele looked to his left, grabbed a lovely bottle of wine and handed it to us saying “this is what you’ll have with your dinner”. He knows us well. My heart stopped as I glanced down at the bottle of red wine in my hand—the label read “Sofia”. Tears formed as I processed the full weight of the message from my ancestor.

I believe everything’s a message. I believe if you are open to signs, you’ll receive them. I believe our souls never die and they watch over us always. And I believe my grandmother was sending me an acknowledgement of thanks for my efforts yesterday. I will hold this memory close in my heart forever. Thank you, Raffaele, for being my grandmother’s messenger. 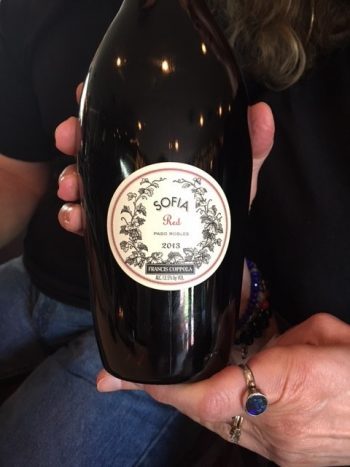