Agnes, or “Agnieszka” as known in Polish, is my paternal grandmother. I will try to piece together what I know about Agnieszka and attempt to put myself in her shoes as I did for my maternal grandmother, Zofia.

Amazingly in a collection of old black and white photos my parents had was a photo of what I had labeled “unknown family in Europe.” Our second visit to Poland in 2013, this time to visit family, undoubtedly confirmed the photo to be of my grandparents and two of my dad’s siblings—his younger brother, Vincenty (or Vincent); and his sister, Stanislawa. I now knew how my grandparents looked! How do you describe the emotion of seeing your grandparent’s faces for the first time in 52 years? 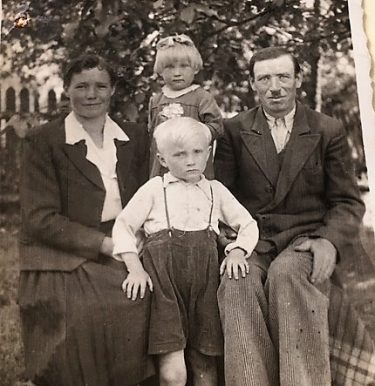 My parents never went through the black and white photo collection they had saved from the “old country” with us. I just assumed it was all people from the displaced person’s camp; and as you recall, as a child I didn’t touch the sleeping dragon by asking too many questions.

Once I knew how my grandparents looked, imagine my delight in finding what I believed was a second photo of my grandmother! The original is a family photo with my grandmother, grandfather, their daughter and a son. The second photo I found appears to be an earlier photo of Agnieszka sitting on the grass with the same two small children and another young lady who looks like she may be peeling potatoes. 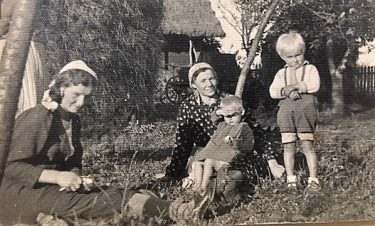 This young lady peeling potatoes could very well be my grandaunt (some refer to this relationship as “great aunt”). Although I don’t even know for sure if my grandmother had a sister.

I know the Basa family (my grandmother, Agnieszka’s maiden name) lived down the road from the Bronicki family (my maiden name). And a family visit seems likely, right? It is within an easy walking distance. I know from our trip to Poland in 2013. It was somehow comforting to discover the Basa family still lives in that house to this day, and my grandmother’s daughter’s daughter—my cousin’s family—still live on the farmland my dad was born on. Next door to the Basa family is another cousin. Within 10-20 minutes are more cousins and distant cousins. My roots run indelibly deep in my homeland.

I don’t know a lot about Agnieszka prior to her early twenties. She lost her father sometime between 1914 and 1918, during World War I. She would have been between 20 and 24. He died from typhus, a disease often associated with wars and natural disasters. Remember, Poland didn’t exist on the map during World War I, but its geographical position between the fighting powers (Germany and Russia) meant much of the fighting occurred there resulting in overwhelming death and destruction.

It’s estimated over three million Poles were made to enlist in the armed forces by the occupying powers while another approximate 300,000 were taken as forced labor into Germany. I’m not sure which of the two happened to my great grandfather. Famine and disease caused further civilian losses. His grave is not in the family gravesite because his body was never sent back to the village. He died at “at points unknown”.

I don’t know the year my grandmother, Agnieszka Basa, married my grandfather, Jan Bronicki. Even though I’m in touch with the relatives still living in the village and on my dad’s home farm, they also do not know. I only know Agnieszka had her first child—my dad—when she was 28 in 1922. Jan was 32. It’s my assumption they were married not too long prior to that because marriage and family went hand in hand.

Remember from 1796 until 1919, Poland did not exist as a county. World War I ended in 1918. In 1922, it had only been four years since World War I had ended after much destruction to their land and less than three years since Poland’s independence had been confirmed June 1919 thru the Treaty of Versailles. There had been border fights fought between 1918 and 1921. Poland was finally “settled” in 1922.

Agnieszka and Jan had four children. There were three boys and a girl in order: Michal (my dad) in 1922, a couple of years after that Jozef in 1924, Vincenty, the last boy, came approximately two years after that; and Stanislawa was born in 1928. I wonder if they planned it that way, approximately two years apart for each child. It seems so well organized, so on purpose.

I’m not sure why my dad and his next oldest brother, Jozef, were not in the photos. Perhaps they were in school. I have to believe that photography back then was not cheap and the opportunity to have a photo taken was not an everyday event. But I also know the Poles were (and still are!) strict about things like education and responsibility. So pulling your children out of school for a photo was probably not even a consideration.

My dad was in the fourth grade, around nine years old, when he went to live with his dad’s older sister during the school year to go to a better school. He continued there through the sixth or seventh grade. Given the sibling’s ages, dad would still have been living at home when either photo was taken.

The school in his home town had two grades in one room and alternated every hour: quiet/homework and “loud teacher instruction”, as my dad worded it. My dad could memorize just by one reading and was getting straight A’s by 4th grade. So I’m thinking they decided a better school would be more challenging for him. He told me he almost wasn’t accepted at the new school but passed the entrance test. History and geography were his best subjects.

Now back to the photos! As you may have noticed in your old family photos from that era, most did not smile. My grandmother is smiling in both photos which I find so endearing! I’ve had the two photos sitting on my laptop the past few weeks to inspire my writing. As a result, she’s been on my mind a lot. We’ve become great friends in my mind’s eye. Having her photo has made it easy to imagine I knew her. She seems so approachable and, I must add, absolutely gorgeous! I would have liked to have known this beautiful lady. The smile on her face in these two precious photos does not betray the trials she endured in her life thus far. There was more hardship to come.

Germany invaded Poland September 1, the Soviets on September 17, 1939. After heavy artillery fire and much destruction, Poland’s capital city, Warsaw, surrendered to the Germans on September 27, my dad’s 17th birthday. Warsaw is only about three hours away from my dad’s village.

Hitler intended to erase the Polish nation and “Germanise” the territory. The Soviets likewise were intent on “intellectual genocide.” Poland was again partitioned—Germans on the west, the Soviet Union on the east. Mass arrests, exile and executions followed. They estimate that between one and two million Poles were sent to Siberia, the Soviet Arctic and Kazakhstan in 1939–40. I’m sure my grandparent’s village was gripped by fear—another World War in their homeland.

Within the year, Jan passed away in my dad’s arms. My dad told me he was the only one in the room with his dad when he passed away. Jan was 50. If I have the timing right on their marriage, Agnieszka and Jan were married only 18 years. Within the following year, my dad was taken in the middle of the night by the Germans as a prisoner of war—thrown into a truck with other boys from the area to be delivered to German farms for forced labor.

Whenever the Germans came through their village again Agnieiszka took her remaining family of three children and hid in the forest. My cousin’s daughter, Agnieszka’s great granddaughter, recalls Stanislawa telling the story that they ate from the field at night, finding a potato or two. So it was cooler outside.

One of my yoga students is also from Poland. Her parents remained in their house when the German’s came through and demanded they vacate. Of course, they resisted. Because of their resistance, they were sent to the concentration camps.

I would expect that word of the Germans approaching your village and knowledge of what resistance could bring, prompted the survival instinct to hide in the forest. I can’t begin to imagine the fear my grandmother had without a husband to rely on and after having lost her oldest to the Germans as she hid her family in the forest. Upon returning to the farm, the German tank tracks were visible near their home, some chickens missing, the house disheveled.

When we visited my dad’s family in 2013, my cousin’s daughter, Anita took us for a walk in the nearby forest that surely my dad had frequented with his brothers and sister. The smoothed out hollows in the earth where the Polish villagers would hide from the Germans were still apparent this many years later. It was an eerie, surreal feeling to walk through the forest. On the one hand my dad probably spent some wonderful hours playing within the forest area; but on the other hand, the energy of villagers in wait and in fear lingered.

My dad never made it back to the farm after World War II. He never saw his mom again. This fact was driven home when during his final years with Alzheimer’s he would wander off saying “I’m going to find mama!”

I’ve been gazing upon my grandmother’s lovely smile these past few weeks, and I have imagined she and I would have been close had I been privileged enough to know her. Her smile has touched my heart. When I close my eyes, her image enters my mind. She lives in my made-up memory of what might have been. She would have been 66 the year I was born. Had she lived to a ripe old age, there would have been plenty of time to spend together creating the grandmotherly bond we were never to share. Yet, I still talk to her as though she can hear me because I believe she can. This I know for sure. Souls never die. Family bonds are forever.